an observation report by 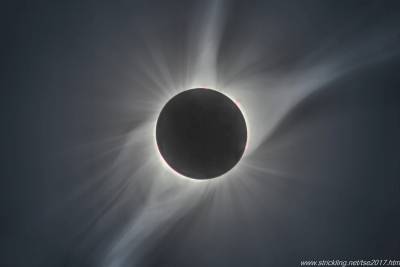 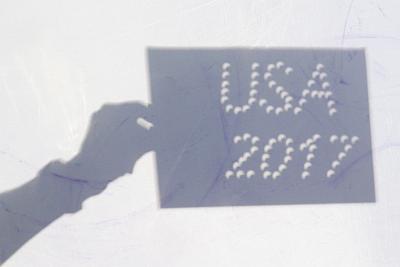 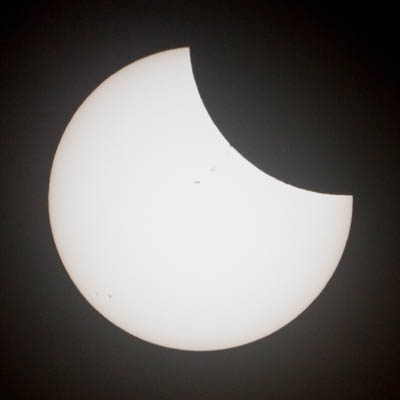 The times for that location, from EclipseDroid:

For the photography I used a 500mm Telephoto lens f/8, a Canon 450D and EclipseDroid. The camera was oriented so that the north direction is turned by 24° to the left on the images below. 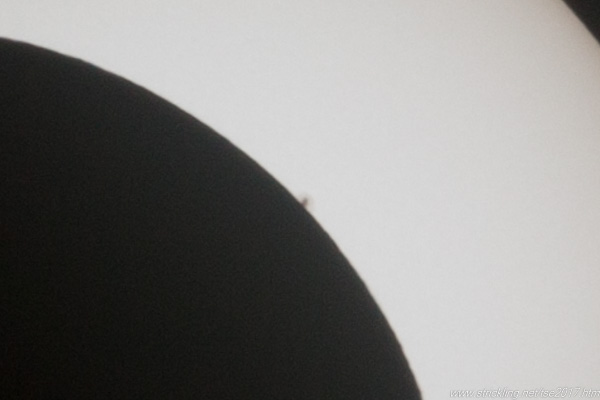 In the partial phase it is easy to see that sunspots are not really black, they are actually brighter than the dark lunar limb, which is only illuminated only by the earthshine. The latter, however, is only appearing on long exposures during totality. 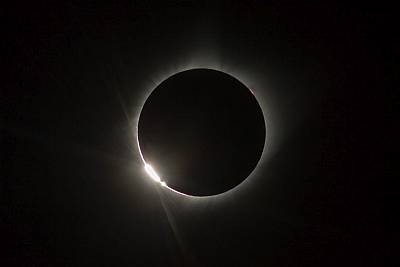 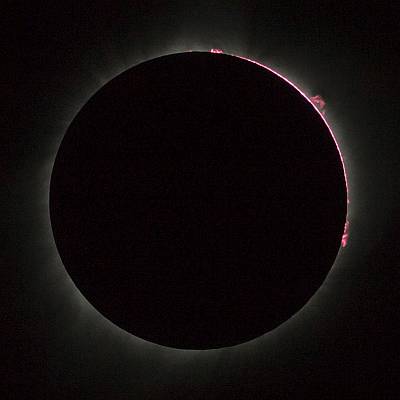 It was worth to notify, that at third contact there were many beautiful prominences at the western solar limb, but the eastern limb at second contact did not show any of them. Longer exposures reveal the coronal holes around the prominences (picture lower right, 1/125s, ISO 100, 500mm f/8). 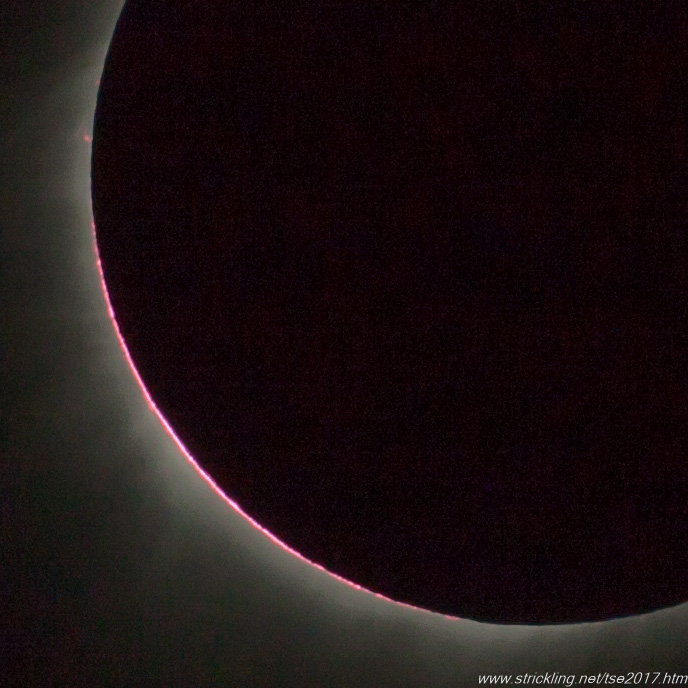 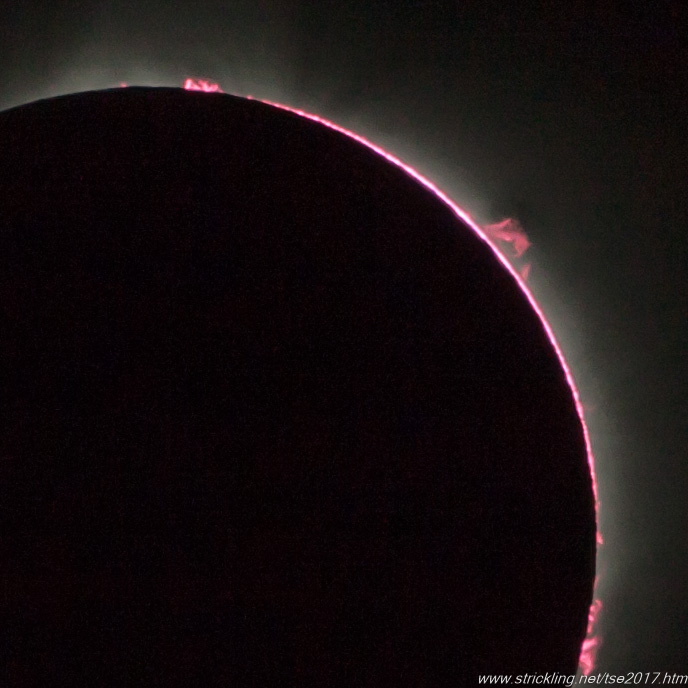 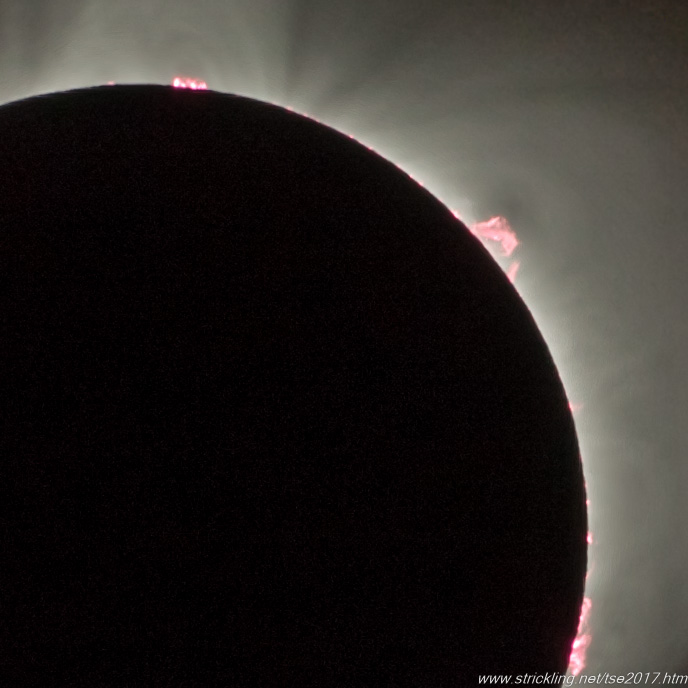 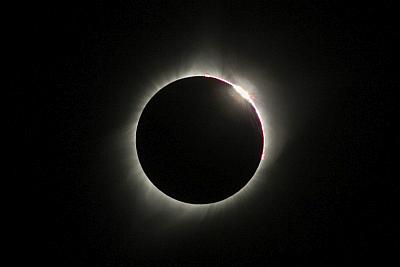 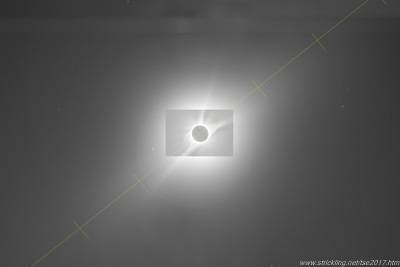 I also used an infrared modified DSLR, the Canon 650D, with a ProPlanet 742nm Infrared filter to capture the outer corona. The contrast was enhanced by a Larson-Sekanina filter (30°, 10 pixels). Relatively strong lens flares were removed manually from the images previously.
In the picture on the left the ecliptic is marked by the diagonal yellow line with marks every two degrees. In the center there is a HDR image inserted.
You can see the extent of many thin streamers and the diffuse background in the ecliptic plane.

On the left you see an overlay image of six images with 1s exposure at ISO 400. For the image below, four images with ISO 800 were additionally blended.
On the original picture, stars are recognizable up to the approx. eighth magnitude. Lower, to the right: A combined image of LASCO/SOHO, same image section (image source: helioviewer.org). 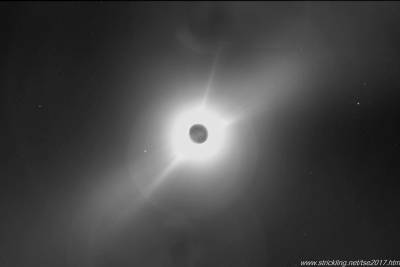 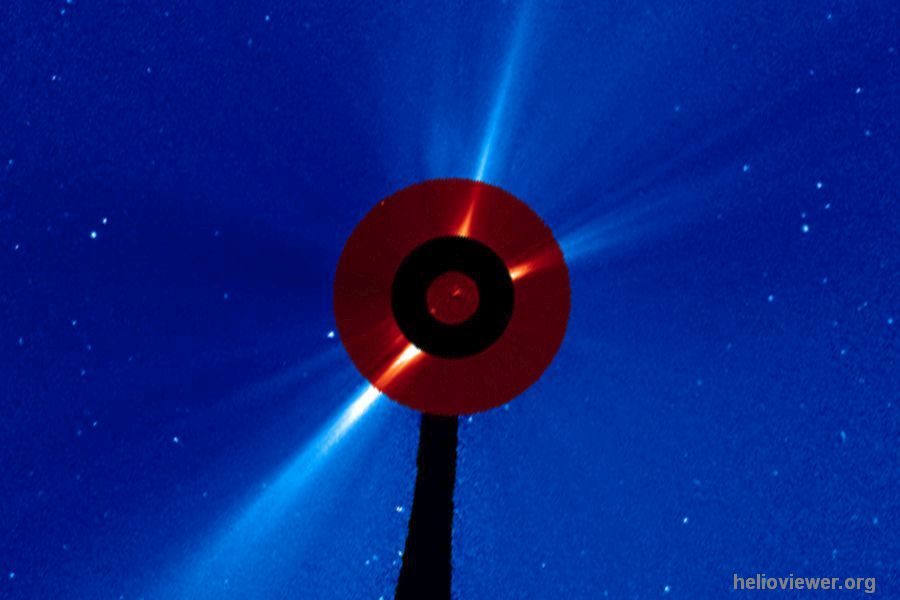 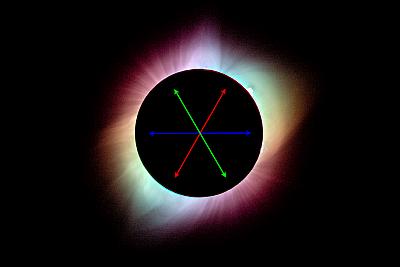 I also tried a polarimetric experiment, but some of the photos show in-motion unsharpness, due to manipulation of the polarizer.

Left a contrast enhanced version of three exposures with 1/30 s exposure time, f=500 mm f/8.
The color channels (Red, green, blue) are assigned to the three orientations (0° 60°, 120°) of the polarizer. Colored arrows indicate the angle of the polarizer (Electric vector).
Click to get a larger image with the original contrast.
Unfortunately, due to the in-motion unsharpness, the inner fine structures cannot be evaluated. 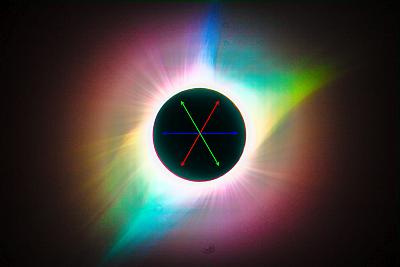 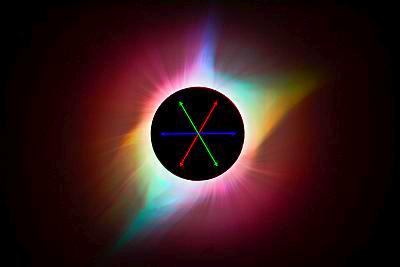 HDR composite of the above two images with 1/30s and 1/2 s exposure time. 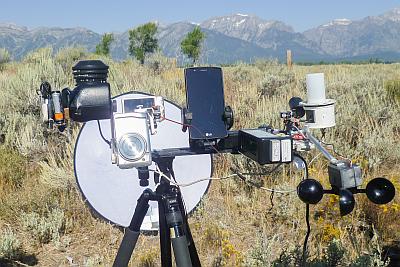 I've also built an experiment to watch and record the eclipse shadow bands.
The shadow bands could be seen very impressively on my projection screen. They became visible about three minutes before the second contact.
Unfortunately, one camera did not record the shadow bands, the second camera has turned off prematurely appr. 50 seconds before 2nd contact.
The projection screen has a diameter of 1.08 m (3.5 ft), at the lower edge is a calibration board in the dimensions 20 x 15 cm (7.87 x 5.91 inches).

The image below shows a frame from the YouTube video, the original image on the left, and the contrast-enhanced version on the right. 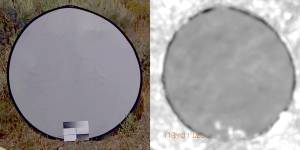 Video of the shadow bands before the second contact, taken with an LG G4. Split screen, left side showing the original video (gamma corrected), right side contrast enhanced by dividing an average sequence and Gaussian noise reduction.
Unfortunately, the video is affected by vibrations caused by the periodic swaps of the sky light intensity sensor (SQM). 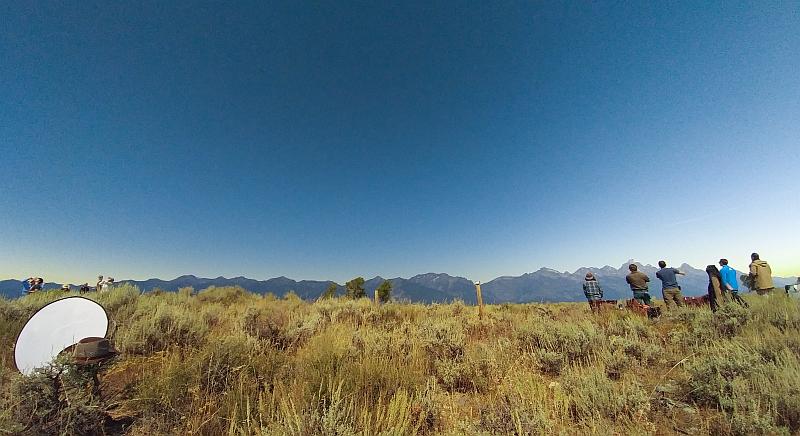 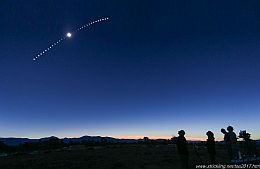 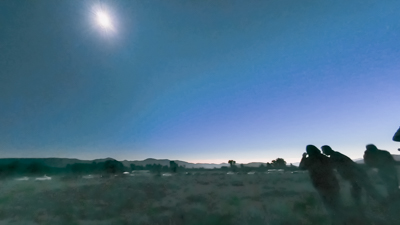 The dramatic changes of the landscape.
Left: 19 seconds before the second contact. The lunar shadow is clearly visible above the mountain range of the Tetons in a distance of 6 miles.
Middle: Totality. To the south, very beautiful the twilight colors could be seen.
Right: 6 seconds after the third contact.
Photos: Courtesy Christian Strickling, LG G5 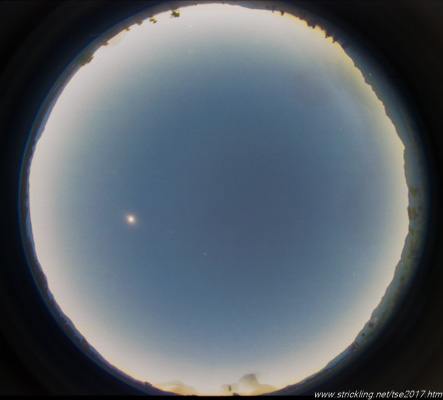 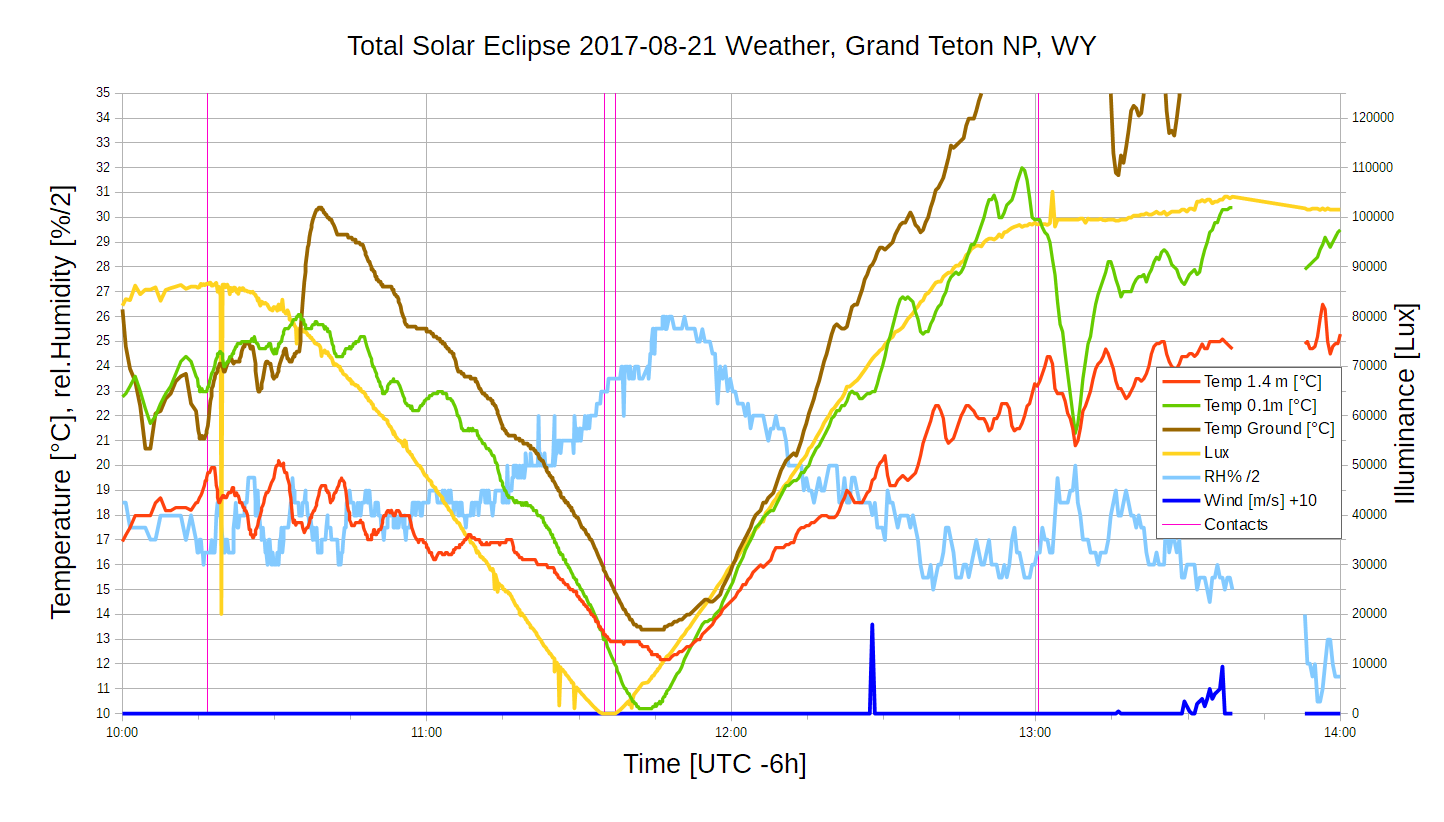 The wind blew very weakly on the eclipse day, with no appreciable gusts. An eclipse wind could not be measured during this eclipse as well as in my other eclipses. In the diagram below, there was added a constant value of 10 m/s to the wind speed.
Download my values here as csv file. 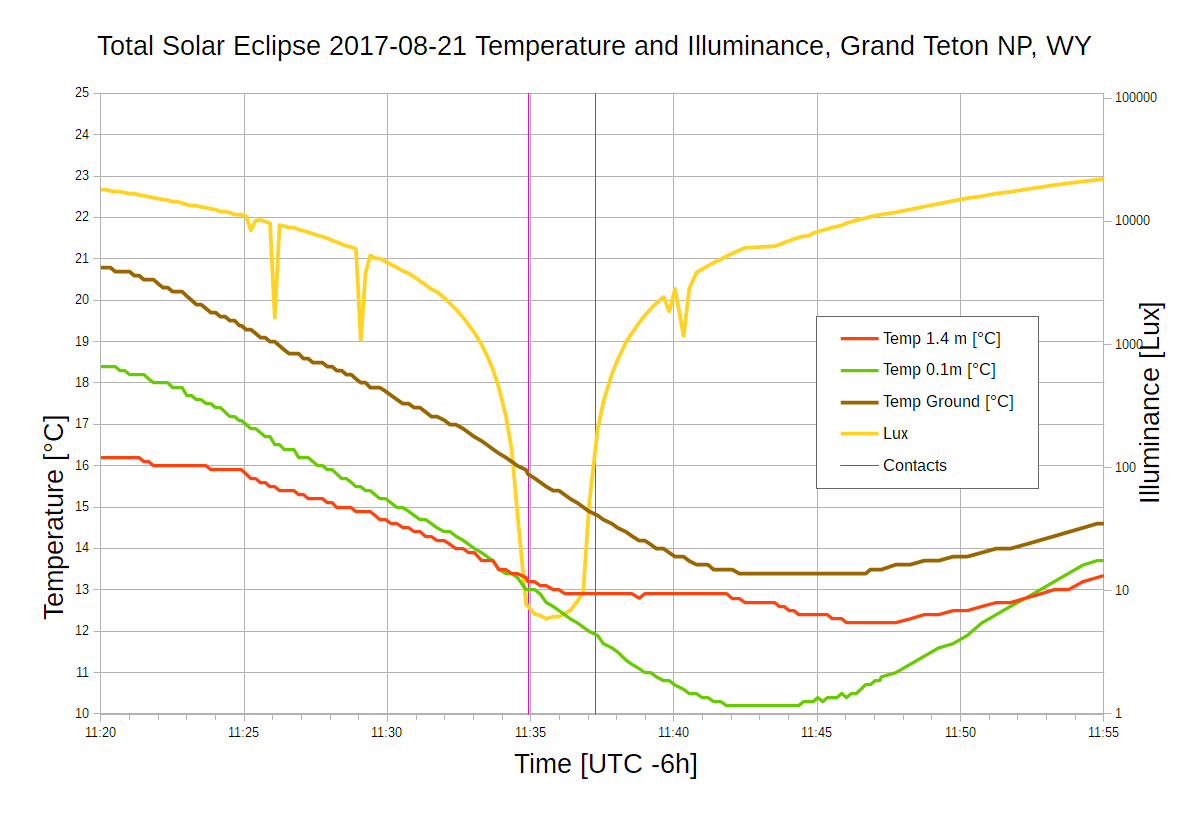 Detail of the temperature and illumination during the central phase of the eclipse.
The minimum illuminance was almost 6 lux in the center of the totality, slightly more than during the eclipse of 2016 in Indonesia (5 Lux there). This corresponded to the illumination, which I could measure at a solar depression of -5° 34' below the horizon, just 29 minutes after sunset on August, 19th. 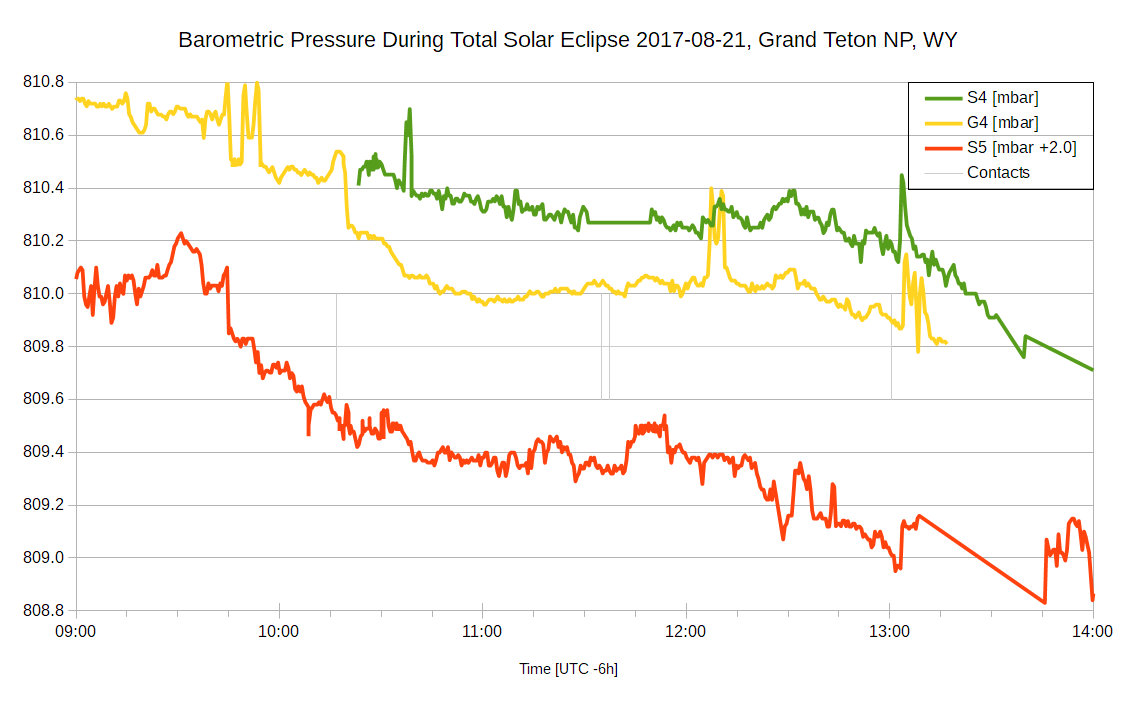 The air pressure during the eclipse, as was measured by three different Android smartphones (Samsung Galaxy S4, Galaxy S5 and LG G4). The eclipse contacts are marked in the graphic by thin vertical lines. Apart from the general trend of decreasing pressure on eclipse day, there is no specific influence of the eclipse to the air pressure recognizable.
To adjust the devices to each other a constant value of 2.0 mbar was added to the values of th Galaxy S5. 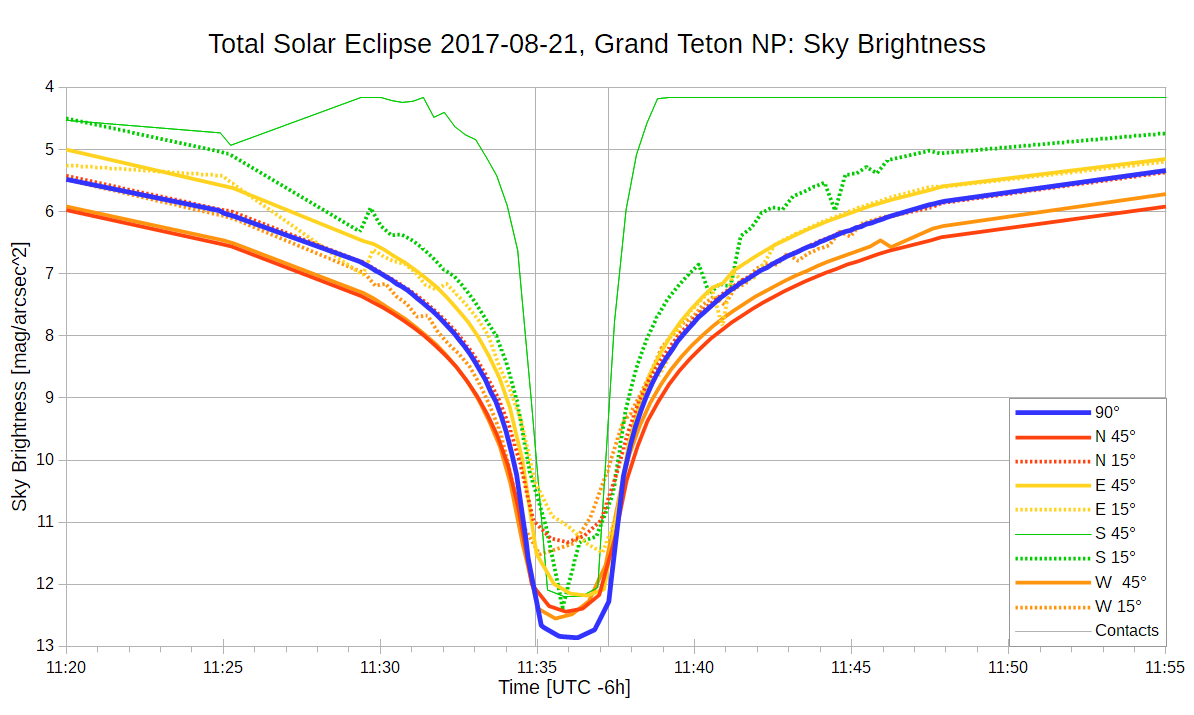 With the help of a sky brightness meter using the same sensor as the well-known SQM, I measured and recorded the brightness in different directions of the sky.
It was measured in zenith (90 ° elevation), 15 ° and 45 ° elevation in all four main directions.

At the zenith, a minimal brightness of 12.85 mag/arcsec2 was achieved during the totality. This corresponds to the zenith brightness approximately 30 minutes after sunset or before sunrise with a solar depression of -5.78 °. This is a little bit lighter than my recording at the eclipse flight 2015 or the eclipse 2012 in Wuhan, China.
The sensor in the 45° southern direction shows the strongest rising and quickly saturates, since the sensor was exposed to direct sunlight. Its value is therefore only limited comparable to the other measurements.

For comparison (picture right): The curve of the clear night in the Teton National Park from 08/18 to 08/19/2017. Magenta-colored vertical lines mark the twilight times (civil, nautical and astronomical twilight). At 3 AM local time (UTC -6h) I recorded 21.46 mag/arcsec2 as the darkest value.
Download my values here as csv file. 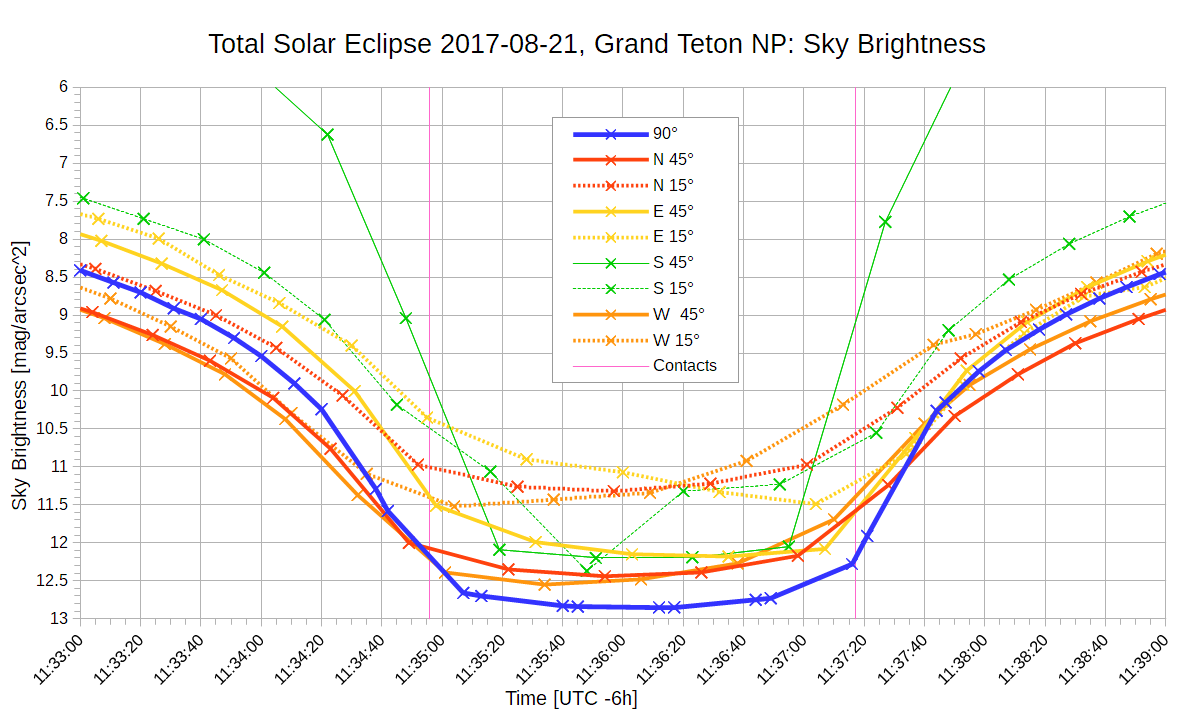 To the left: Graphic in higher temporal resolution of the central 6 minutes.

Details of the Eclipse 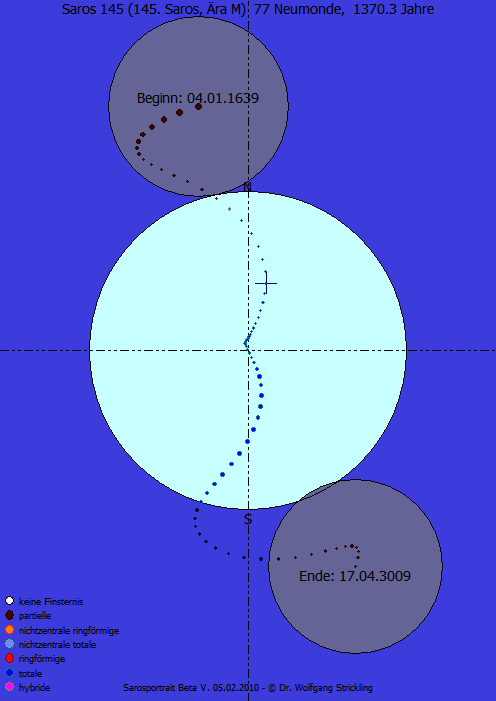 For details on this eclipse, the circumstances, tips how and where to observe have a look at the Android App Eclipse 2017. For calculation of other eclipses you can use AstroWin for Windows or EclipseDroid for Android. The latter is also good for controlling cameras and it is supporting sophisticated observation programs.

The Great Eclipse 2017 is part of the Saros-Period 145, which lasts from the year 1639 and will end with its eclipse number 73 in 3009. In a Saros period there will occur every 18 years and 11 1/3 days an eclipse. Depending on the number of leap years and after a date line transgression the value may vary from 18 years and 10 to 12 days. It is containing 34 partial eclipses. The other 43 ones are annular, hybrid or total, with durations between 00:50 minutes up to 7:12 in the year 2522. The image right is showing a Saros-snail, indicating how the lunar shadow hits the earth at the maximum of each eclipse. Click into the image to enlarge. It was created with my Windows-software Sarosportrait.
There are always several Saros cycles active, for example cycle 139 includes the coming total solar eclipse of 2024-04-08 in the USA and Canada. Their predecessor was the eclipse in the Mediterranean of 2006-03-20.

The graphic on the left shows the eclipses over the years with their appearance during the seasons. The eclipses are crossing once in 19 years all the seasons, because the slightly inclined lunar orbital plane is spinning once in this time.
In addition to the Saros cycle, the Metonic cycle is also shown. In this cycle the eclipses occur after 19 years on the same date or with one day offset. However, the cycle runs only briefly, after 38 years the series breaks off. It can also be seen that at least one lunar eclipse belongs to every solar eclipse, occurring two weeks before or after the solar one. However, this can be one of the nearly invisible penumbral eclipses.